Fiji finally found their feet at the Rugby World Cup with a dominant 45-10 victory over Georgia on Thursday as their jet-heeled backs tore their Pool D rivals apart in a seven-try rout at a rain-drenched Hanazono Rugby Stadium.

Winger Semi Radradra scored twice and made three others as the Pacific islanders rebounded from defeats to Australia and Uruguay to get their first win in Japan.

While their upset loss to Uruguay has all but put paid to their hopes of reaching the quarter-finals, Fiji are now in pole position to finish third and qualify for the 2023 World Cup. 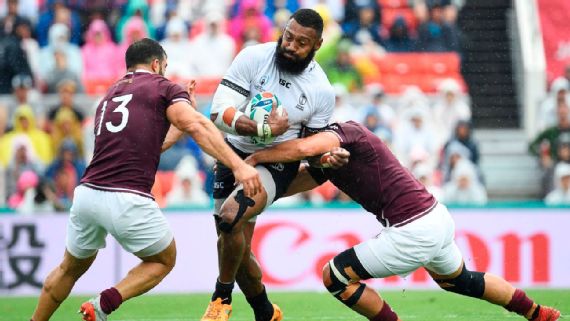 Fiji’s fifth and sixth tries came in quick succession, Kunatani going over from a few yards out before replacement Ratuniyarawa finished off a sweeping move from inside their own half.

The Fijians got their seventh try four minutes before the end, Radradra sprinting clear after Georgia had coughed up the ball in their own territory.